Samantha Kullman, who plans to become a special education major is the 2020 recipient of the John Mobley Law Firm Scholarship.

Samantha attended five high schools before graduating Ridge View High School because her family moved around a lot. That didn’t stop her from getting involved, though. She played trumpet in the marching band and played handbells for her church. As a member of the teacher cadet program, Samantha assisted with her school’s special education class. She works as a part-time bookkeeper at Bi-Lo. 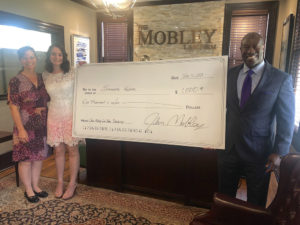 Samantha plans to attend the University of South Carolina in Columbia in the fall to major in elementary education. A recipient of the Teaching Fellows Scholarship, she plans to become a special education teacher.
In Samantha’s letter of recommendation, Ridge View High School Teacher Cadet instructor and adviser Mathew R. Tinneny says:

“It has been the most wonderful experience getting to know Samantha, Sam to her friends and teachers. Sam’s mother works for the Federal Government on Ft. Jackson. Being an Air Force brat, I understand just how hard it can be moving away from everything you’ve grown accustomed to and having to start all over again. As a teacher, I have seen many children in her position become withdrawn and antisocial. Not Sam! She has made the effort to meet people, get involved, and become a “somebody” at RVHS. She is so positive I wish I could make 100 more just like her.

Academically, Sam is head and shoulders above the majority of the students at RVHS. I taught her in a dual credit college course, Teacher Cadet. She is more than capable of doing well in college.

Sam has the real passion to teach that most people only talk about having. She’s a natural. Sam also wants to pursue a teaching career in Special Education. She genuinely has a heart and natural talent for it.

Sam has applied for, gone through the rigorous selection process and has been awarded the prestigious Teaching Fellows award and will be a Freshman Teaching Fellow at The University of South Carolina. There are no words for how proud I am of her.

Her mother works several jobs and Sam, in addition to school, also works as a bookkeeper at a grocery store. I know for a fact that, if awarded, the money will be going to exactly the student this award was created for.”